Marty Campbell
“I’m probably one of the biggest rodeo fans in the world,” says professional rodeo announcer, Marty Campbell.  “And I think that is a big help in me delivering my passion for the sport to the rodeo audience.”
Marty Campbell is more than just a casual fan of the sport, though.  He started out as a contestant, qualifying for two College National Finals Rodeos and winning a little in the Professional Rodeo Cowboys Association as a saddle bronc rider before suffering a career-ending broken neck in 1996.  Since then, he has served in many other capacities in the sport, such as President of the National Intercollegiate Rodeo Association; college rodeo coach; Production Secretary at the Wrangler National Finals Rodeo; on-air talent for ESPN’s broadcast of the CNFR; Openings Production Manager of the CNFR; and more.  In addition, he still has his hand in the competition side of the sport as an occasional steer roper.

Announcing rodeos, however, is an endeavor that lets Campbell combine his passion for the sport with his God-given ability to speak and entertain.  With more than twenty-five years of entertaining audiences under his belt, that ability to move people has allowed him to draw audiences into what is happening in the arena with a color that gets them nearly as excited about the action as he is.
His knowledge and experience in the sport allow him a frame of reference that not every announcer can provide.  “I’m blessed to be friends with so many cowboys, stock contractors and everyone else.  That gives me a bit of an inside track when it comes to sharing their stories with rodeo crowds,” says Campbell.

​​That knowledge and ability to communicate earned Campbell the Professional Rodeo Cowboys Association's Excellence in Broadcast Journalism Award in 2016.  According to Campbell, the buckle is among his greatest honors. "To be recognized on that stage (at the WNFR) right after they handed out the Saddle Bronc Horse of the Year, to be introduced by my friend, Will Rassmussen, and to receive my buckle shortly before my buddy, Wayne Brooks, won his for Announcer of the Year--what an honor.  What a dream come true!"
Campbell has been selected to announce the RAM Columbia River Circuit Finals Rodeo in Yakima, WA; the Benny Binion Bucking Stock Sale at the Wrangler National Finals Rodeo; the College National Finals Rodeo alongside legendary announcer, Boyd Polhamus; the Columbia River Circuit Finals Steer Roping; the Mountain States Steer Roping Circuit Finals; the Journey to the Cross PRCA Steer Roping in Garden City, Kansas; the Central Montana Ram Prorodeo in Lewistown, MT; the High Desert Stampede PRCA Rodeo in Redmond, OR; the Ellensburg Rodeo in Ellensburg, Washington; the Crooked River Roundup in Prineville, Oregon; the Elgin Stampede in Elgin, Oregon; the War Bonnet Round Up in Idaho Falls, Idaho; the legendary Cowtown Rodeo in Woodstown, New Jersey; the Hawaii Saddle Club Rodeo in Honoka'a, Hawaii; and countless other events. 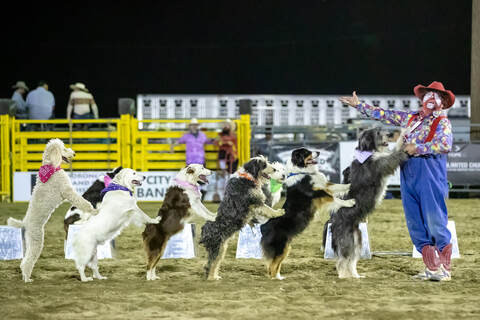 Bert Davis, The Coppertown Clown -
THE CLOWN WITH ALL THE DOGS!!!
​
Sit yourself down and prepare to be entertained! Bert Davis, the Coppertown Clown is here! He’s armed with a wacky sense of humor and a wonderfully trained group of dogs and performing in front of a large rodeo crowd is ‘old hat’ for this veteran entertainer, rodeo clown, barrelman and specialty act. His stage is a rodeo arena and his cast of players’ bark and howl; his quick wit, award winning comedy routines and ability to interact with a crowd offers up the promise of tear rolling laughter for his audiences.

Bert Davis, often dubbed the “Clown with all the Dogs” reached the third round in the TV show: America’s Got Talent; they were the only animal act to make it to Las Vegas in 2010. Or you might have seen them on Quest TV program – “Dogs with Jobs”. Known as “Davis’ Muttley Crew” this act features 16 rescue, owner surrender, strays, “Born to Perform”, and what they call “store bought” dogs, adopted by Bert and his wife, Frannie. They refer to the dogs as their kids and grandkids, all of whom are superbly trained tricksters.

Davis has been working in the rodeo business since 1974, beginning his career at age 16, as the youngest bullfighter in the nation; that was the start of a noteworthy career that has brought a long list of awards and honors for Davis. He has been selected three times to perform as the featured act at the National Finals Rodeo in Las Vegas Nevada. Bert has been nominated for the PRCA Comedy Act of the Year Award several times. Bert has been a PRCA Gold Card member since 1998. He laughs now that his PRCA Gold Card has its own Gold Card… Bert and his dogs have been International Contract Acts Showcase Champions seven times. In 2012 they won every category they entered in the Showcase: Dress Act, Comedy Act and Clown/Barrelman.

While Davis is a courageous and hilarious performer; it is his numerous dogs that truly endear him to the spectators. Those sidekicks, with their high energy antics make Bert, the Coppertown Clown, one of the best and most-traveled animal specialty acts in the industry. They have gained international notoriety by performing in Six Provinces/Territory of Canada, 45 different States and in Australia. Not much can throw a funnyman who has faced rampageous bulls on a daily basis for the past 48 years. What keeps this extremely courageous and hilariously talented performer going those thousands of miles, year in and year out? Well, it comes from the heart… Garth Brooks sings “It’s the roar of the Sunday crowd” in Rodeo. But for Bert Davis, the Coppertown Clown, it is the roar of any crowd. Follow Bert Davis, “The Coppertown Clown” and Davis’ Muttley Crew on Facebook. Website: www.coppertownclown.com .​